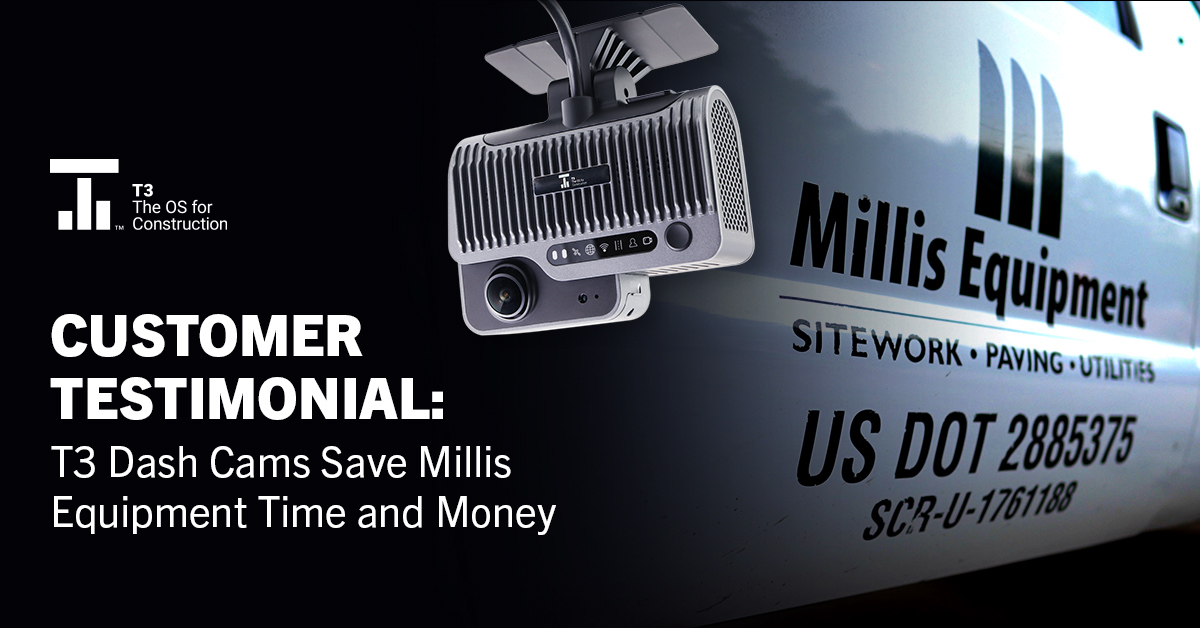 “If I have a machine down and my mechanic is in a courtroom defending himself — I’m losing money on that equipment, and that could be thousands of dollars a day.” — Chade Dickey, Millis Equipment fleet manager.

Blayk Whitaker was driving his Millis Equipment truck on a Saturday morning, just a few days after a T3 Dash Cam had been installed in his truck. He expected it to be a quiet, uneventful morning. It wasn’t.

A small sedan pulled out in front of Blayk and the driver hit their brakes, causing Blayk to hit the vehicle with his truck and push the much smaller car across two lanes of traffic. Thankfully, no one was injured.

The driver of the small sedan claimed Blayk was at fault and made an insurance claim against Millis Equipment to be compensated for the damage to their vehicle. Thanks to footage from his T3 Dash Cam, it was obvious Blayk was not at fault and he maintained his clean driving record.

“Driving down the road, not even up to the speed limit and this driver went over and I couldn’t even see the brakes, no way I could get out of the way of it,” Blayk said. “It was my word against the other driver, and that car hit me coming over. You can see the brake lights come on before it came into my lane and no blinker as it was coming over.”

When Blayk and his boss Chade Dickey, fleet manager for Millis Equipment, pulled the dash cam footage and reviewed it, they were able to prove to the insurance company that Blayk had done nothing wrong.

“The cameras kept us out of a courtroom,” Chade said. “The other driver had no idea we had a dash cam. Because of the T3 Dash Cam, we avoided having our guy tied up in a courtroom for a day and out of the shop.  My mechanic didn’t have to spend a day testifying and it saved us time and money.”

Ironically, the crash occurred just a short time after the cameras were installed in the Millis fleet of vehicles.

“Our safety guy initiated getting cameras because it was giving us a break on our insurance,” Chade said. “Everybody in the construction and transportation industry knows that you’re driving a big billboard with the company name and phone number. And some people look at that and see a payday.”

“The underwriters ask specifically what we do to track and secure equipment,” Chris said. “They were very satisfied to hear we installed additional T3 Dash Cams and can set up a geofence for all equipment.”

Another benefit of T3 Dash Cams to Milis Equipment? Chade has already noticed a difference in two of his drivers since the cameras were installed.

“At least two drivers have become more cautious now there are dash cams in their vehicles,” Chade said. “The camera talks to them and tells them ‘hard breaking’ or ‘excessive acceleration.’ I’ve watched footage of the guys when the camera talks to them and you can see them cut their eyes toward the camera and give it a smirk. We have a CDL driver who was always pretty cautious anyway, but the cameras have made him even more aware of what’s going on and safer in general.”

T3 Dash Cams are sensitive enough to pick up on cell phone usage, distracted driving and driver seatbelt usage. Alerts can then be sent to the fleet manager or business owner to address the issue.

“I tell my guys we aren’t using these to spy on our drivers,” Chade said. “We are just making sure everyone is safe and we are able to protect ourselves in the event of an accident.”

Mills Equipment is saving money on insurance, avoiding false liability claims and putting a safer fleet on the road with T3 Dash Cams. Want to find out how T3 Dash Cams can help your company? Visit our website to find out more.